New Vids and Pics shows a plan of Airbus which want to develop new jet fighter for EU, and this concept seems mix of Pak-Fa and F-16XL.

Vids typically represents combination of 'Low Observerability', 'Capability of Data Network', 'Co-operation w/ Unmanned Aircraft', and 'Advanced Sensors'. Themselves are not fresh, and similar to 5 or 6th Gen. Fighters of US. But I want to get few noticeable things as many as possible.


Maybe noticeable for this vids are (except familiar things...)

- There is no emphasis on Air-Air Combat or Manuever; OML of the concept seem to be optimized for high speed cruise and LO performance, like YF-23 did (wing-planform is more similar to F-16XL).

- Control surface on the LE like Pak-Fa probably provides least maneuverability for this fighter; this wing-planform and layout of control surface is not for sustained fight, but for instantaneous fight.


2. No emphasis on weapon delivery or 'killer role' of the fighter

- It seems to have at least more than one internal weapon bay (from vids, only one central bay and no-side bays). But vids did not show anything related to it. Vids gave strength on Network capability; providing information, penetration of enemy air-area. Finalizing information and delivering weapon for destruction are probably done by unmanned or cruise missiles.

- not like US' way, Airbus want this fighter to do lead 'Hunt', not 'Kill'. This aircraft seems to have two crew members; it means secondary crew focuses on gathering information and commanding other friendly asset to lead missions.

- If this assumption is true, internal weapon bay or bays are not big enough to contain 'expensive weapons', like NSM, Taurus, Storm-shadow, JASSM. Maybe, Airbus thought minimizing weapon bay could save cost of this fighter. Weapon bay of the fighter probably load relatively light weapons, Meteor, self-defense IRIS-T, or Advanced or replacement version of AGM-88s.

- While it has larger wing planform than similar-size-jet, it only emphasize on 'ISR', 'Leading Friendly Asset'. There is nothing about 'Super-cruise', 'Delivering Silver Bullet on enemy's heart', 'Dramatic Air Combat'.

- Fancy high speed, weapon bay, high-thrust engine, and TVC things cost money and weight of the platform. Maybe if saved weight is changed to fuel and combined with fuel-economy engine, it could achieve extremely long range and endurance than its counter-part.

- From estimation of position of components (weapon bay, LD), extremely large LERX, and nose-cone shape, it probably highly unstable and could achieve low trim drag and high L/D for its mission.

- 5 or 6th gen. fighter cannot be cheap, but this concept decisively give up few fancy things escalating cost, and try to save cost and number of required fighters. Few roles, delivering weapon, air-combat, should be done by other conventional jets.

- In given cost, it focuses on 'Endurance', 'ISR', 'Commanding' role in danger area.

- If this concept is right, Airbus targets a small number of production in reasonable cost.

** If this project follows trajectory of Tornado or Eurofighter, development process will be sluggish, and not effective. But I do not hope so that way...
작성자: Valkyrie 시간: 오전 1:40 댓글 없음:

PART A. Usage and limitation of conventional methods

Conventional design methods, semi-empirical equations, panel methods, and CFD w/ inviscid approaches, for the jet fighter is usually valid for less than 15 deg of AoA (sometimes less than 10 deg depending on the configuration of the fighter). They were enough to predict the old jet fighter performance except stability problem because flight envelope of the old ones does not exceed the confident range of the conventional methods. The jet fighters later than 80’s, emphasizing maneuverability via lessons and learned from Vietnam war as shown in Chap. 1, reached higher AoA range then the old ones, and the flight envelope exceeded the validated range of the conventional methods. The expansion of the envelope triggered studies for the high AoA in various ways, wind-tunnel experiments, CFD with turbulence models, flight tests of models and modified experiment aircrafts. Database of these studies are now basis and current mainstream of modern aerodynamics however these methods requires expensive calculation cost to describe complex vortex configuration around a fighter body.

Therefore, conventional methods still be effective in their own area; they have advantages in calculation cost which can be still helpful for initial performance estimation of the jet fighter. When the rough figures of the fighters are not determined, quick estimation is required to optimize the configuration. For these reasons, conventional method is still powerful tools for configuration optimization for required performance with reasonable calculation costs. The conventional methods assumed flows are well-aligned without separation; this assumption saves calculation cost compared to modern ones. However, it omits complex vortex problem, essential for the high AoA flow around the jet fighter as studied in late 80’s.

Fig. 2.1 Flow change via vortex in AoA, and its effect on lift curve of the aircraft [1]

When the flow around the fighter goes high AoA, adverse pressure gradient and vortex become important phenomena. Unfortunately, these are very sensitive to variables, AoA, wing shape, Mach number, Reynolds number effect, and small perturbation on the wing, and they can possibly lead to fatal problems for the stability of the aircraft.

In a delta wing aircraft, vortex is generated even at the intermediate AoA, and this phenomenon is adopted to increase lift of the aircraft, however as described above, precise amount of consequential impact of vortex is not easy task, and iterative experiments had been taken as shown in Fig. 2.2 and 2.3 [2]. AoA basically determines projected area of the fighter body on the flow and it leads to amplitude of flow circulation. Projected area of the body become larger in high AoA; flow acceleration via circulation goes larger. Increased speed of the flow makes high suction peak of pressure at the leading edge, and flow should pass through from low pressure to high pressure region, called adverse pressure gradient. Due to this pressure distribution, flow loses its energy on the upper surface of the wing, then flow cannot be attached at the surface in certain status as shown in Fig. 2.4. In high AoA, the adverse pressure gradient flow dominant most of the upper surface of the jet fighter. 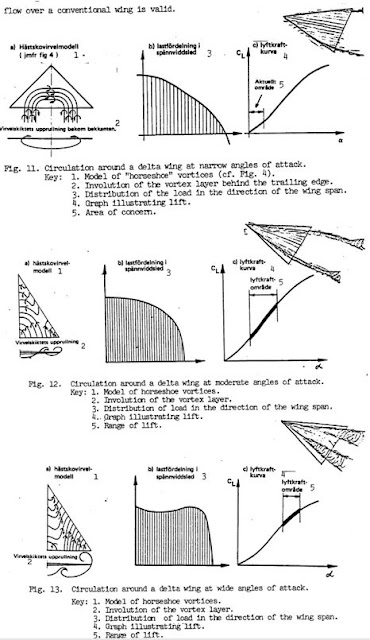 Fig. 2.2 Configuration change of vortex upper surface of the wing; vortex is generated at small AoA, and lift distribution and vortex structures are dramatically changed via AoA change [2] 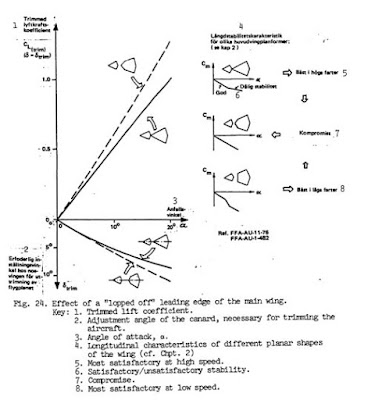 After WWII, as described in Chap. 1, speed was the priority among performance factors of the fighter; in order to achieve supersonic or better transonic performance, swept or delta wing shape had been proposed for delaying shock wave via speed of Mach 1. These swept leading edge shapes are effective in drag reduction, however it gives more lift loading on wing tip via induced AoA as shown in Fig. 2.5. In order to overcome this natural-borne issue of the modern jet fighter wing, modification of the plane geometry or drag-penalty-options, fence, vortex generators and wing-twist, are considered (solutions for high AoA will be discussed in later chapter).

Mach number is also one of the main variables affecting high AoA flow. As described in AoA, flow is accelerated at the leading edge of the wing, and if freestream speed is more than the critical Mach number, part of the flow on the airfoil enters supersonic region. In supersonic flow, if there is any adequate stimulus, shock wave is generated at the upper-surface. The shock wave does not only change flow speed from super to sub-sonic, also change flow direction, pressure and even whether separation status of the flow. Fig. 2.6 shows that sudden change of the pressure and flow direction induces flow separation right behind of the shock. The critical Mach number of the wing is depending on the shape, thickness of the airfoil and plane geometry of the wing. In Fig. 2.7[3], un-expected flow separation problem is sensitive to Mach number and AoA in given wing geometry. 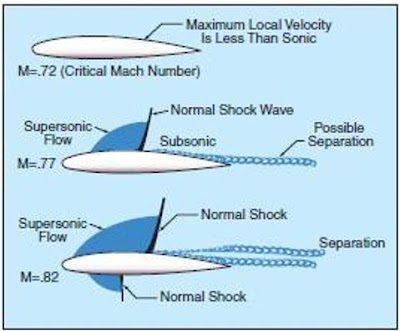 Fig. 2.6 Supersonic acceleration of flow on the upper surface of the wing 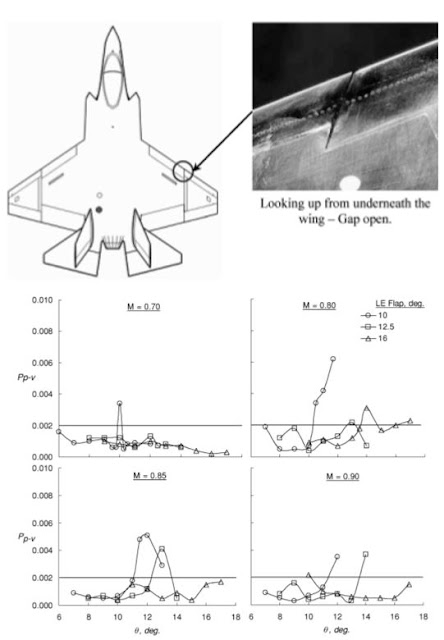 Reynolds number, ratio of the inertia and viscous force of flow, is already one of the important parameter in the flow problem, more precisely in Navier-Stokes equation. When we consider the conservation equation of the momentum and its normalized form, viscous force term via friction is represented as ratio of the Reynolds number. It means that if Reynolds number goes higher, viscous force become negligible and pressure force become dominant. Otherwise, if Reynolds number is small, flow governed by viscous force is dominant being like paint or paste. In aircraft, encountering flow speed is usually more than 200mph at the ground; pressure inertia is much powerful than the viscous one. Because of this fact, impact of viscosity around the aircraft is limited in very narrow region, called boundary layer. If the aircraft is in cruise or maximum speed condition, except skin friction drag, most part of the aerodynamic characteristics of the aircraft can be explained by pressure based terms, and this is why some conventional method assumed flow as inviscid (viscosity is negligible). In high AoA, world is changed in every way; Reynolds number effect could determine exact point where the flow loses its energy required to attach at the surface of the aircraft. As shown in Fig. 2.8 [4], wind tunnel testing conducted in smaller Reynolds number could not provide precise vortex separation point on the blunt nose of the legacy Hornet fighter.

Most of the wind-tunnel testing cannot put the full-scale aircraft in the tunnel due to the physical limitation of the test section; in that case, Mach number is the most important parameter which should be synchronized. In order to represent realistic flow condition around blunt nose in high AoA, additional transition strip was attached at the underside of the model. Indeed, vortex distribution around the nose become similar to that of the flight test result [4]. In the following corrected wind-tunnel testing [4], an array of small dot is attached to make flow from laminar to turbulent which means it artificially changed low to high Reynolds number flow.

Flow separation problem related to the Reynolds number and transition via small perturbation maybe one of the most complex problem in Fluid mechanics, and deeper discussion about this topic is out of my focus. But, it should be noted that generation and breakdown configuration of a vortex at the certain AoA is changed dramatically via small stimulus. Because of that, deeply discussed in later chapter, small devices such as fins, gaps and saw-tooth could be a solution or give adverse effect in high AoA. 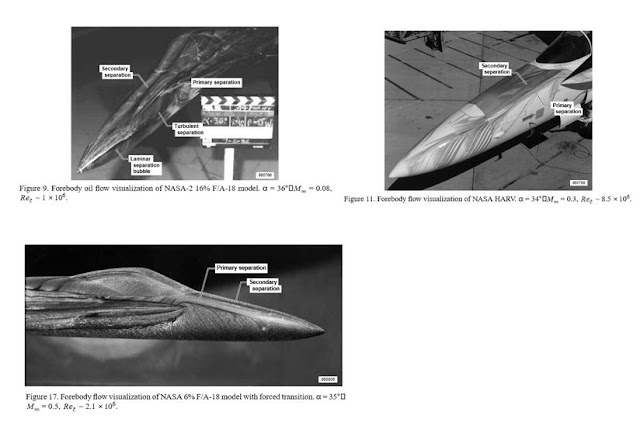 Fig. 2.8 flow separation point difference via Reynolds number difference of wind-tunnel testing and flight test; it should be corrected by using transition strip [4]