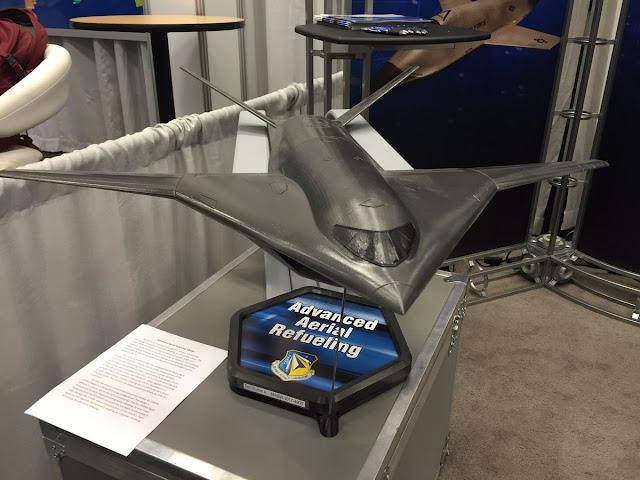 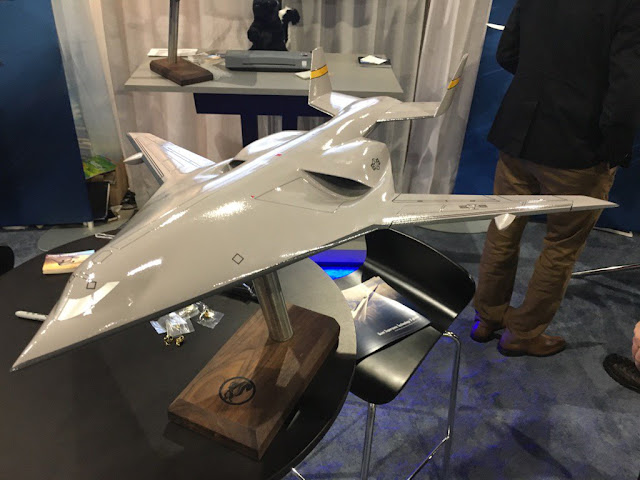 As shown in the model, US pursue stealth tanker. If this kind of aerial refuel success, any aerial platform of US could extend their operation time unlimited.

US already emphasize usage of power in the engine for their 6th gen. fighter having high possibility to have laser weapon on board. Combination of 6th gen. fighter/UCAV with laser and the stealth tanker could provide unlimited magazine of laser in air-space.

1. Why Drag is important for Combat Aircraft ?

Compare to usage of high AoA maneuver, described in the previous articles, importance of minimum drag has always been emphasized since break of air-warfare. Minimum drag directly affects the performance of maximum speed and acceleration which bring aircraft to its maximum speed in short time. The maximum speed and acceleration are directly connected to initiative of engagement which divide life and death of the fighter. If the fighter A is slower than fighter B, the A should force B to give up engagement or shoot down to leave engagement without harm.

Prediction of the aircraft drag, considered in later chapter, is well understood via understanding of laminar, turbulence, and Reynolds number, ratio of flow inertia and viscosity. Before the understanding of the Reynolds number, un-corrected wind tunnel test brought wrong result about drag of the body; small cylinder shows less drag than aerodynamic body in test results, where skin friction is overrated. Because of the wrong result and un-mature structural technology, truss structure of wire was widely used for WWI warbirds. After, correction of viscous effect was known and material and engine technologies were matured, mono-wing aircraft became main-stream of fighters. Then, full-scale competition for increasing maximum speed was started, and it showed edge of the aeronautical technology of major countries, combination of propulsion and aerodynamics.

Dramatic example of speed performance in tactical aspect was shown in Pacific theater in WWII; fighters of USN, USAAF and Japan Empire showed what happens if the speed performance of one side is much inferior than another. At the initial stage of the war, fighter of US like P-40 and F4F could not achieve clear advantage over Japanese Zero. However, as F6F, F4u, and P-38 having overwhelming advantage of speed appeared, Zero and other Japanese fighter could not return to base when they were in disadvantageous situation. It discriminated survival ratio of veteran pilot of two forces, then it leaded USN and USAAF win the war. Similarly, Bf 109 and Fw 190 of Luftwaffe could enjoy the advantage of energy management in middle or high altitude over early fighters of Soviet Air Force. Basically, armament of that time is unguided gunnery of 7 ~ 20mm machine gun which requires align of shooting angle and close range approach. Indeed, disadvantage of speed could not bring the fighter to dead-six of the adversary.

During the age of the Cold war, main armament and target of the jet fighters became missiles and bombers respectively. Although classical maneuvers for dead-six was not pursued, emphasis on the minimum drag and maximum speed was more significant; nuclear-bomb-carrying-bombers should be intercepted before they release the strategic weapons. Bombers became larger and faster to avoid intercept and achieve longer range and more payloads. The jet fighters like F-89, F-101, F-102, F-104, F-106, F-4, Tornado ADV, MiG-15, 17, 19, 21, 23, and 25 showed very strong influence of these goals, heavy armament of radar and missiles and high speed dash performance. Limited performance of the early turbojet engines forced jet fighter designers to minimize drag; usage of area rule, highly swept or variable wing, and variable inlet were introduced. As another usage of the jet fighter, penetration mission profile was widely proposed at that time; F-105, F-111, Su-24, and Tornado IDS were typical example of low altitude attackers. In order to achieve better flight quality and high cruise speed at the altitude, high wing loading and low drag profile were chosen. Highly swept wing shape was preferred to prevent effect of turbulence.

Both of the two targets, high speed intercept and the penetration, triggered low drag design for whole flight region. However, the myth of the mission profiles was broken in the lessons of Vietnam War which brought resurrection of dog-fight design philosophy. In that time, coincidentally, treat of SAM swallowed development of high speed/altitude bombers, and weight of strategic weapon moved from bombers to highly survivable SLBM and ICBMs. Fighters designed after Vietnam war had less emphasized maximum speed or high speed dash performance while energy recovery performance at dog-fight region, from subsonic to transonic, was focused. As described in high AoA article of mine, many additional design points were added like LERX, LEF, or similar things, and these were source of drag at more than transonic speed. Pursue of higher maximum speed was halt, and stealth design, discontinued facet configuration and s-shaped duct, also brought worse perspective of drag design.

In recent days, as credibility of missiles are increased, and it is believed that chance of dog fight will be dramatically decreased in future aerial warfare. Now the kinematic advantage of projectile become more important than platform as missile took the role in aerial warfare. Still, speed related performances are considered as one of the important one for survival capability and delivery of kinematic energy for its projectile. Indeed, it could be thought better minimum drag characteristics of the jet fighters always take a big part.

Although fighters have same class of maximum speed, aircraft could have different characteristics in acceleration and fighting style as shown in example of P-51 vs P-47, and F-4 vs F/A-18.
P-51 and P-47 are two famous icons of USAAF in WWII warbirds, and both could enjoy high speed advantage over German or Japanese adversary during the war. P-47 was designed as American muscle car style while P-51 minimized drag in relatively normal sized engine, later changed as famous Merlin engine. P-47 could enjoy the power of engine in high altitude due to the effort of heavy supercharger; mid-sized wing and heavy body help for dive and horizontal acceleration performance in high speed. However, P-47’s characteristics results not only high speed and acceleration in the specification condition but also suffering of low initial climb rate and acceleration in low altitude. Compare to P-47, P-51’s speed performance is well balanced; advanced design of radiator and airfoil brought P-51 small drag coefficient ever in USAAF fighter. Because of the small drag, P-51 could reach top speed over 700km/h while the aircraft have same engine of Spitfire. P-51 has relatively larger wing and better T/W than P-47 which brought P-51 higher climb rate and initial acceleration. Because German’s Fw 190 and Bf 109 are very compact fighters having high power engine in small air-frame, P-47 and P-51 fought in similar style in rough picture maintaining their energy advantage rather than exhausting due to lower energy recovery rate than the German’s. However, in specific details, P-51 and P-47 should win against enemy aircraft in different way due to the difference of their design goal. P-47 should fight in strict energy engagement while P-51 could fight in flexible way than P-47’s. Probably, ‘Mustang-lized’ design of Wasp Engine P-47 is F4u which have balanced performance of turn and speed than P-47. 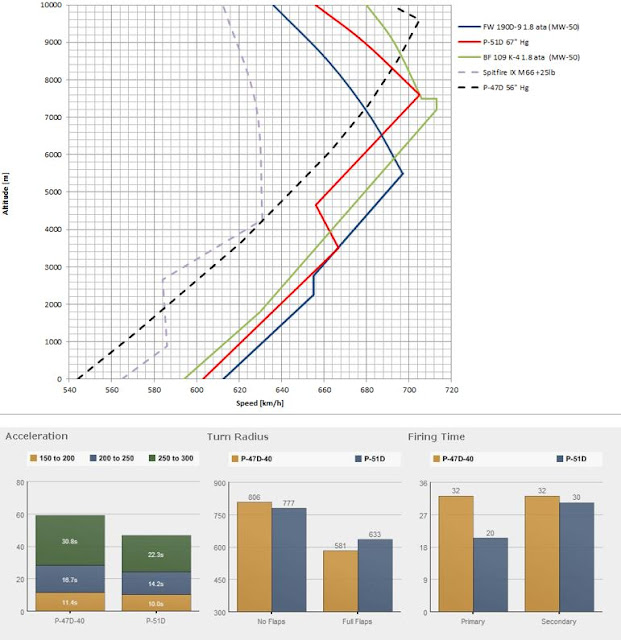 Both F-4 and F/A-18 are USN’s carrier-borne fighter for multi-purpose; F-4 starts its career as interceptor with 8 missiles and F/A-18 its career as fighter-attacker replacing F-4 and A-7. Both aircraft reached around M2 ~ 1.8 with their twin engine although F/A-18 enjoyed its modern-time engine development. With this maximum speed specification, no one could argue these fighters have different design philosophy in different age. F-4 Phantom II have focused long range intercept performance for USN carrier against Soviet bombers; it emphasized maximum speed performance and maintaining acceleration rate with its limited engines. High swept wing and complex variable geometry of inlets are adopted to satisfy this requirement while weight of airframe and ability to achieve high maneuverability were less focused. Compare to F-4, F/A-18 is faithful followers of Vietnam war lessons which reviewed the fighter-fighter dogfight rather than supersonic intercept of Soviet bombers. While famous Tomcat and Aegis system provide the intercept mission, requirements for F/A-18 could be relaxed for the purposes of dogfight. Simple pitot type inlet and near straight taper wing become un-efficient in more than M1.5, however, saved-weight and high lift configuration of planform requiring less AoA and drag in horizontal flight gives better acceleration performance in sub and transonic region. Indeed, both aircraft having almost same maximum speed emphasized very different fighting area each other.

After the age of US’ high teen series, F-22 should perform supercruise to maintain its survivability and give maximum kinetic energy for its ammunition. So, F-22 should be designed for superior acceleration performance from subsonic to M1.6. From these facts, design of minimum drag is problem of focus where the fighter fight and consideration of limited engine thrust. Although dominance of air warfare had been changed for initiative of fight in WWII, supersonic intercept of 50~60s, dog-fight of 70~80s, and maximizing kinetic energy of ammunition of 90s~, minimum drag had always taken part of role in various speed range for acceleration and maximum speed.

Future aerial warfare in 2030s as described in past articles have not shown any focus of speed or acceleration; bigger stealth platform and numerous UAVs provides situation awareness advantages. However, silver bullet class weapons such as hypersonic glider or LREW is currently well developed for future purpose which will strike primary enemy assets in shortest time. Also minimum drag of the planform should be emphasized to achieve high excess energy of engine for DEW and cruise efficiency for long endurance. 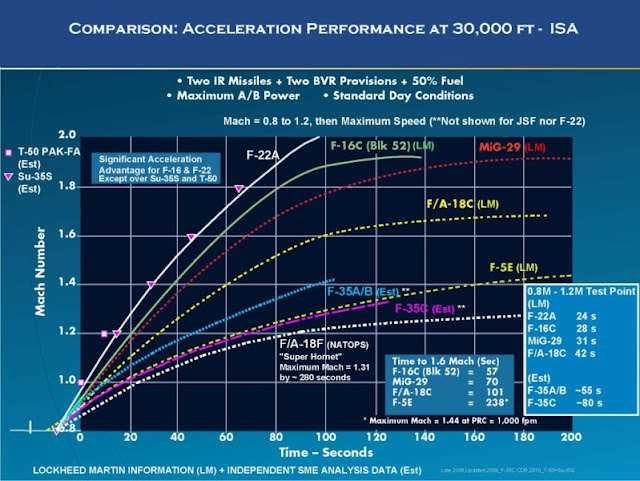 Long range performance of the fighter become more important when the fighter was operated in theater like Pacific or East Asia. It gave flexibility of the mission profile, and determine number of fighter reaching combat area from the certain bases. Concept of 6th generation fighters show massive size than its predecessors which needs lots of power usage and range to give penetration performance. Small minimum drag of jet fighter could ease the supply of fuel and increase the number of fighters which is not negligible for high rank commanders. 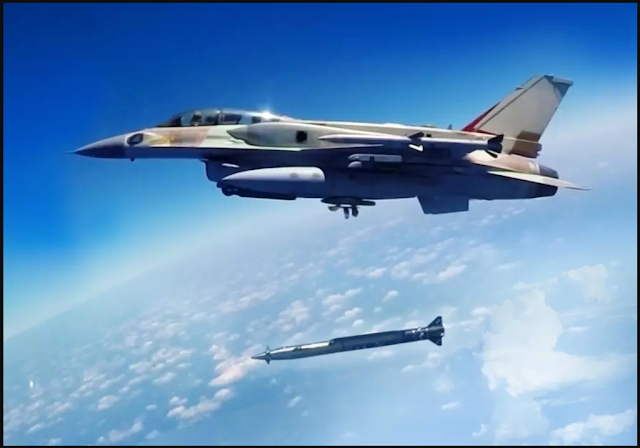 Compare to ASM-3, Kh-41, or ASMP, this missile is lighter (1000lb class), and it could be noted that there is no usual ram-jet type inlet which extend its range in limited size. However if this missile could be carried inside of the IWB of F-35, 'short-arm' of the missile could be covered by stealth performance of F-35. And it is worthy it.

Also, launching aircraft, F-16I, launches its missile at high altitude with toss attitude to achieve maximum range of ballistic path (it is my estimation though)

Small canard type control fins are attached which probably give guidance correction at terminal phase of impact. Although whole geometry of the missile is little bit similar to that of LREW (Air-to-Air), there is no confidence that it could separate its booster. Because of its relatively low weight and less maneuverable requirement as AtG missile, probably there is no separable booster.

From these information and speculations,

* Lighter weight and small size of missile, and ballistic attitude of platform without ramjet
** Shorter range than other supersonic missiles like ASM-3, Kh-41, or ASMP
** Size of the missile could be fitted to IWB of F-35, it could be take role of AGM-88 of F-35s

* Small canard fins with rear stabilizer fins
** Ballistic trajectory requires stronger control forces than other cruise type configurations
** It basically targeted high value assets, however, IAI try to give maximum maneuverability for it
(Uncertainty of information could be corrected at the final phase like radar of SAMs, etc) 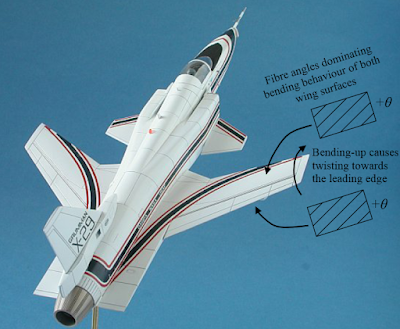 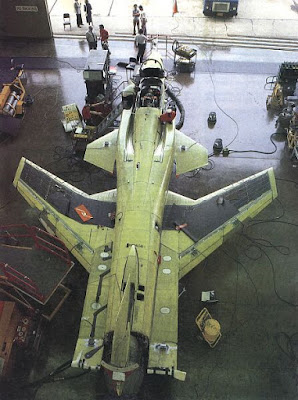 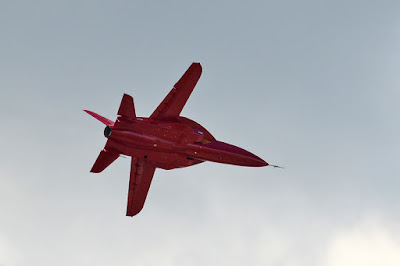