KM-SAM is the Surface-to-Air-Missile developed in Korea to replace the aged MIM-23 Hawk. Known specification is shown below. I assumed weight of the propellant is about half of it (~200kg), and ISP is set to 260s. 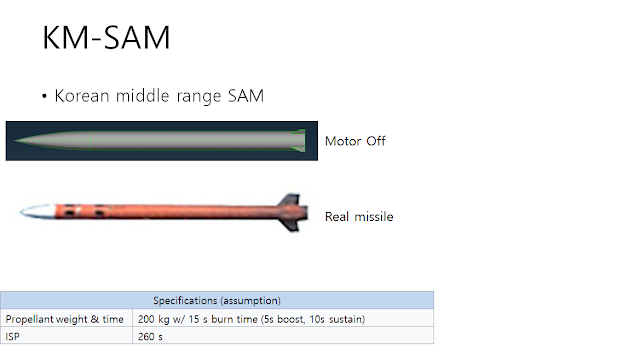 After I made generic model of the missile, I shoot the missile in vertical and horizontal plane.

The result shows AoA of the missile exceed 10deg after it decelerated to M2.5 at 250kft. However, this altitude will fall significantly when the missile goes horizontal direction. 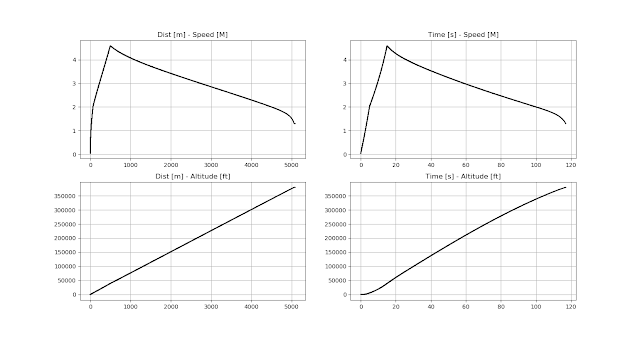 The result shows the missile could reach M4.5 as max speed and less than 100km in about 140s. This condition is only possible when the missile maintain about 40kft. This would the kinematic maximum range. 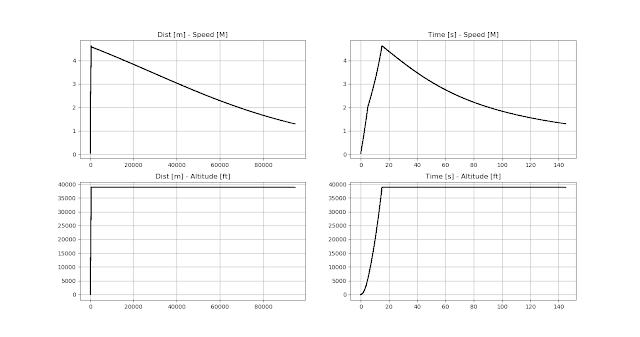 The result shows the missile could reach M4.5 as max speed and about 40km at about 10kft in 1min. This would be the usual air-to-surface engagement scenario for the missile. 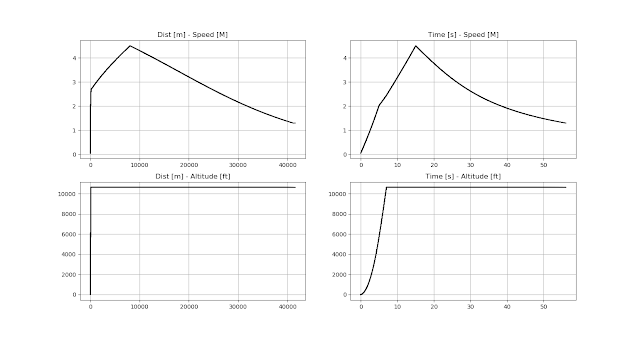 At sea level, missile go slightly above M4 and reach 35km. However, maneuver of the target will decrease the range. 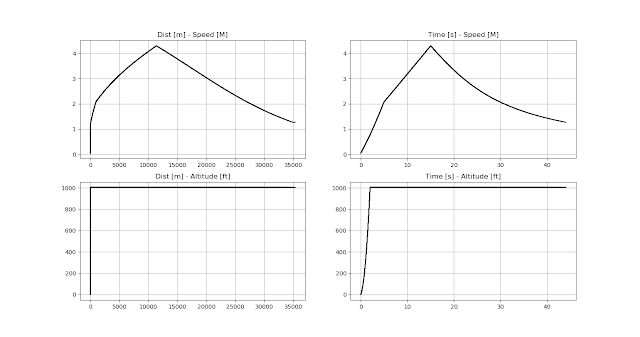 As a interest, I shoot this missile as an Air-to-Air missile. Initial condition of the aircraft is M1.1 or M1.3 with specific altitude while it is terminated at the same speed or 300s of update. 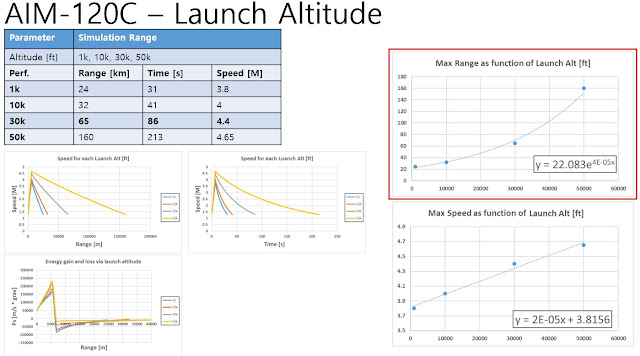 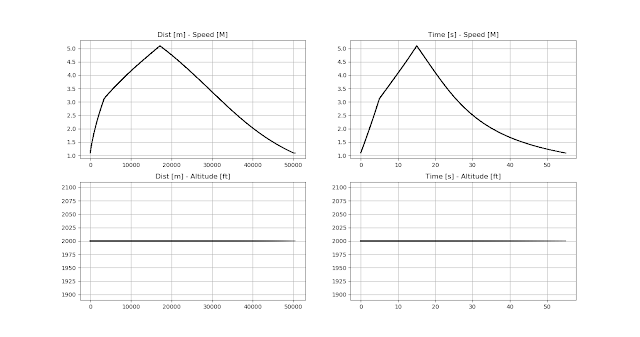 At sea level, missile go slightly above M5 and reach 50km... Because it has larger body than AIM-120C, it almost mimic the performance of the AIM-54 class missile. 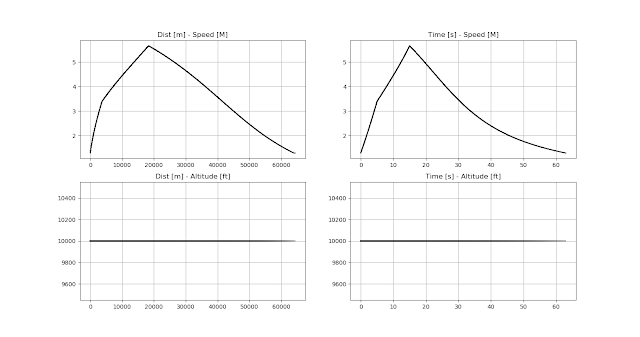 At 10kft, it could reach for more than 60km with supersonic speed in 1min. 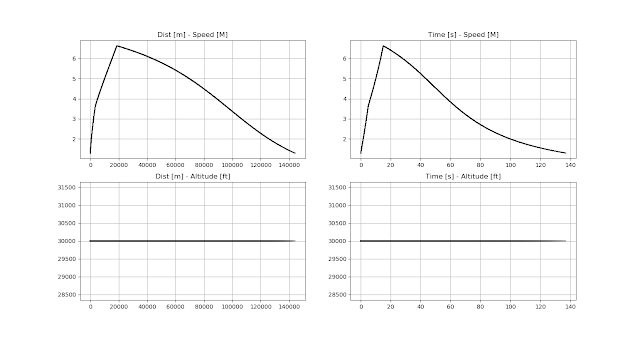 At 30kft, it could reach 140km in 140s, it just slightly inferior than generic Ramjet Air-to-Air missile. However, I should notice that the missile is much heavier than the generic Meteor missile. 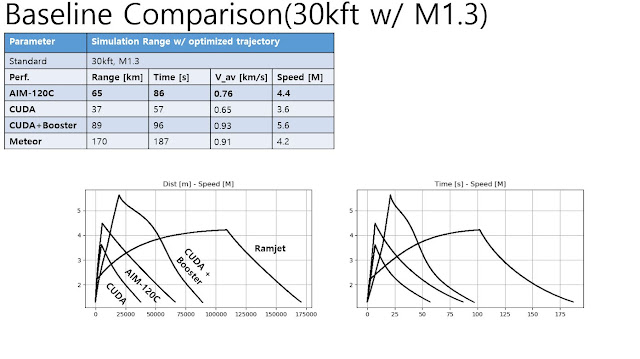 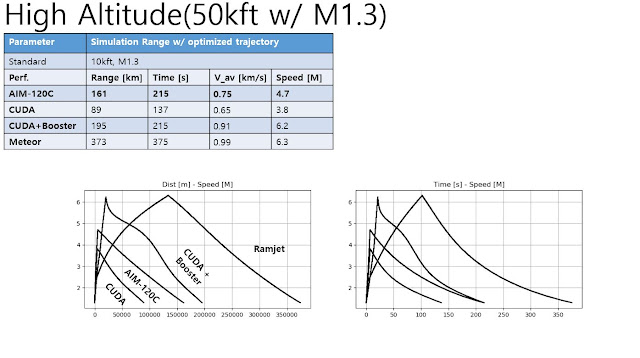 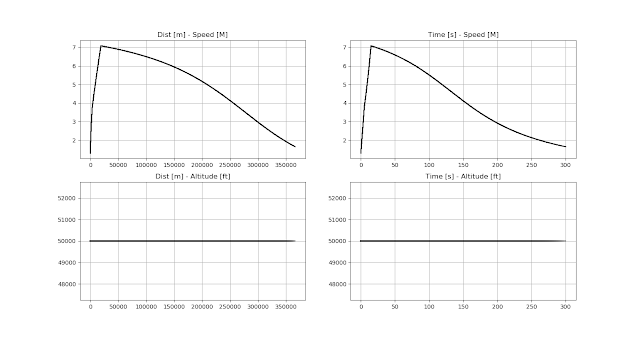 In very-long climb case, because rocket motor is powerful, it can reach 110kft and maintain its speed
(it is unusual for Air-to-Air engage, and probably usual for low-altitude defense of ballistic missile?) 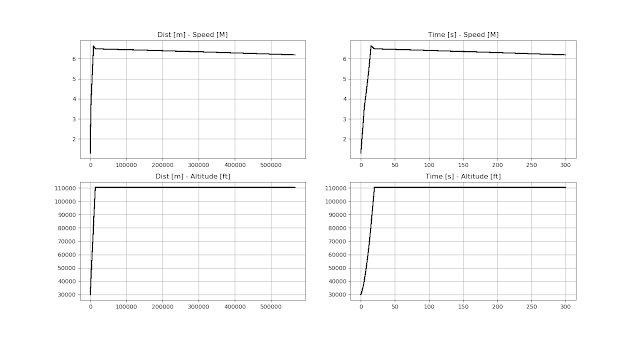 I had modeled KM-SAM model approximately, and tested several trajectory including not only Surface-to-Air also Air-to-Air conversion.

The modeled missile has similar characteristics of known specification, and confirm 40km of effective range for whole altitude.

Because it is large and powerful missile than the conventional Air-to-Air missile like AIM-120C, it has superior kinematic characteristics than that. However, amount of performance increase is almost similar to that of Ramjet missile.

If the missile were converted to Air-to-Air purpose, weight of the missile is not fitted to modern trend of it. While the recent performance upgrade of the conventional missile is trajectory optimization or adoption of the ramjet.