There is a probability that US-Hypersonic Airborne Munition for F-35. It would a new silver-bullet type weapon for Naval-Aviation of US.

Although V-280 is experimental prototype, based on experience of V-22, V-280 already achieve various flight attitude and region in early phase of the flight test.

In recent days, CFD is one of the powerful tool for the prediction of the aerodynamic characteristics. Especially, due to the effort of the enhanced computing power, CFD works for the aircraft design takes larger proportion than the past.

In this chapter, I want to review series of the papers related to the CFD workshops predicting exact aerodynamic value of the generic airliner aircraft, minimum drag and high lift. Those workshops showed edge of the CFD technology because 'Top-end' of the CFD's like NASA, Boeing, DLR, JAXA, and other academic contributors participated.

Purpose of the drag work shop is enhancement of the CFD prediction capability for the airliners which is very sensitive for the drag due to the fuel economy. Quality of the CFD can be varied by mesh, turbulence model, solver, and others. After few drag-prediction-workshops, workshops for high-lift prediction was held which represents complex geometry of slat and flap in high AoA. Additional mesh work shop was also held for both geometries of drag and high-lift ones.

Among the three workshops, drag, high-lift, and mesh, it is the oldest and longest workshop. Drag prediction is one of the most important task to determine economy of the aircraft. Indeed, the target of the CFD condition is narrower than others (only considering cruise condition) however, accuracy requirement is much severe than the others.
Progress of the workshop took long time to generate full-model of the aircraft as shown in the Fig. 1; 1st case only describe the body and the main-wing while the 2nd had added effect of engine and its pylon. The 3rd workshop combine the effect of bump between wing and fuselage; most of the airliner has that kind of fairings for the purpose of landing gear integration, structural bulkhead, and aerodynamic continuity. 4th, 5th, and 6th workshops fully described the airliner OML via addition of horizontal tails. Fig. 2 shows summary of the workshops from 1st to 5th briefly, and I re-organized case-summary in Table 1. 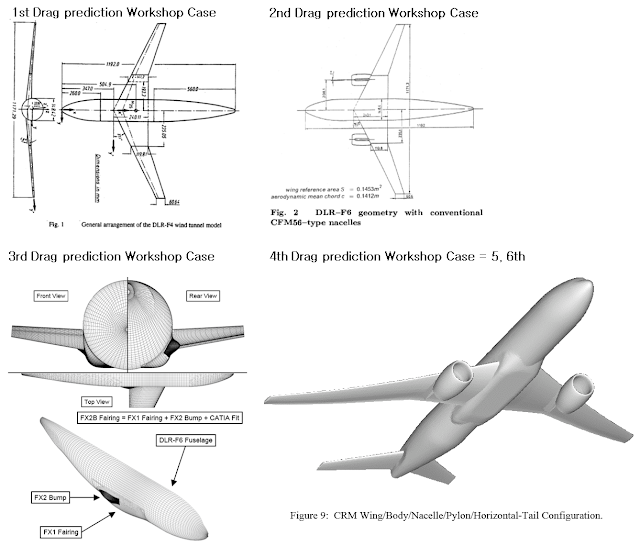 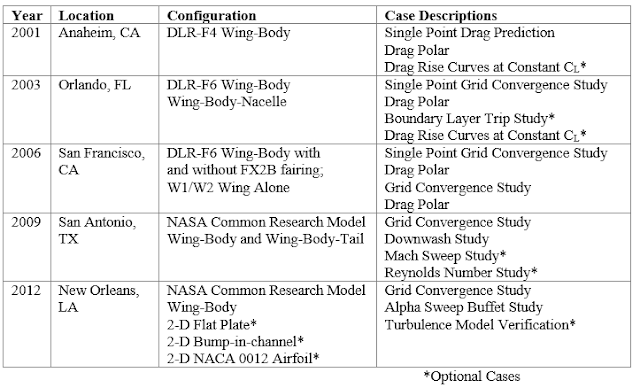 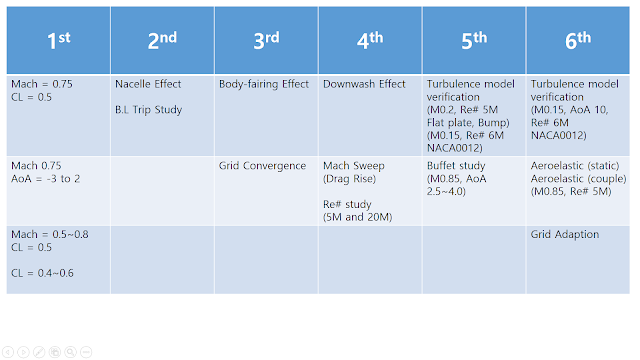 Below table 1 summarizes cases of the workshops through 1st to 6th ones. The first workshop attempted estimate drag of the simple body in cruise condition of M 0.75 w/ CL = 0.5 while AoA variation and Mach number changes occurs as optional cases. As described in the previous paragraph, Engine nacelle is added to depict the aircraft in more realistic manner while boundary layer trip effect is investigated in the second workshop. The third workshop now regard the effect of the body-fairing in between wing and fuselage while grid convergence of the same cases are studied to show effect of the grid size.
The fourth workshop had considered the effect of the downwash generated by the main-wing on the horizontal tail. Also, Mach sweep and impact of Reynolds number effect are shown for better precision which is important for the skin-friction and transition of the laminar-turbulent flow. The fifth one compare the turbulence model performance via validation cases of flat plate, bump, and standard NACA0012 airfoil in the low Mach number. Buffet phenomena is also studied in M 0.85 condition. The sixth workshop remarkably conducted aero-elastic for both static and coupled method in M 0.85 condition, and effectiveness of the grid adaption technique is shown.

From now on, I will review the workshops to edge of the CFD technique for aircraft drag.

After I conducted sensitivity analysis for the hardware change of the missile, weight of the propulsion fuel, burn time of the fuel, ISP value, and drag. As described in the previous AIM-120C analysis (links in the upper part), now I will move on to the 'extended options' for the given hardware.

More than just describe the possibility of the trajectory optimization, I also added longer-burn booster for the CUDA+Booster missile. 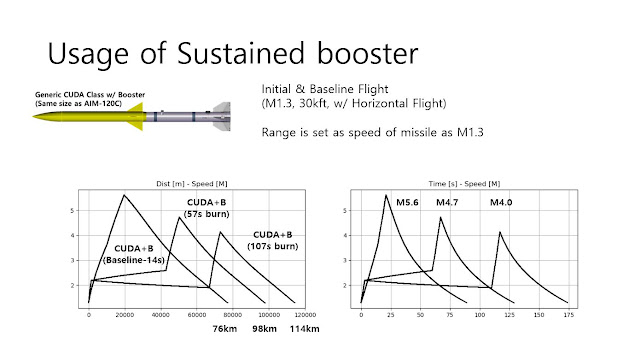 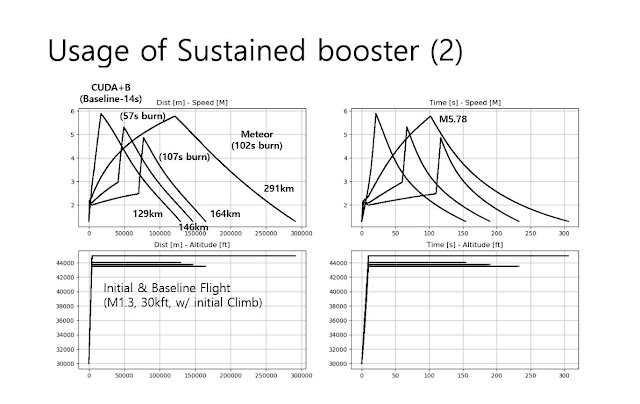 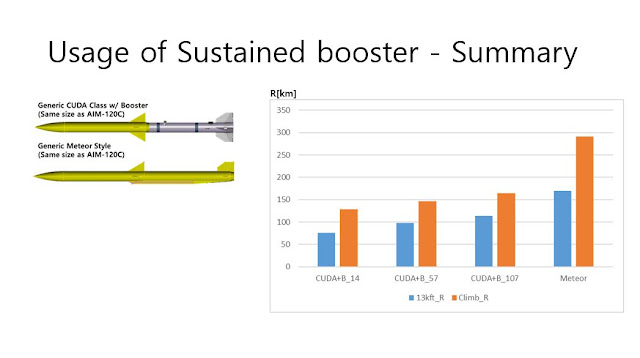 I have extended test for the CUDA+Booster concept with longer-burn type booster; compared to the 14s of burn-time, 57 and 104s version of the boosters are tested.

In the flight of level flight at 30kft, effect of extension can be shown, but not as dramatic as expected; only about ~20km longer range is obtained via 'per-50s' longer burn. With the initial climb trajectory, range of the baseline can be extended but effect of long-burn is reduced. Because longer-burn type cannot go higher altitude at the initial climb, impact of the long-burn is reduced.

Anyway, maximized range(?) of the CUDA+Booster can be achieved by long-burn and initial climb, and it is about 164km w/ just less than Mach 5 maximum speed. Ramjet-powered, generic Meteor type missile having same trajectory has 290km range with sustained kinematic energy.

Still, advantage of the overwhelmed-ISP provided by ramjet is much significant than CUDA+Booster. The CUDA+Booster type could achieve higher speed easily at the initial phase however, draggy OML of the CUDA and its small weight contribute loss of the energy after burn. 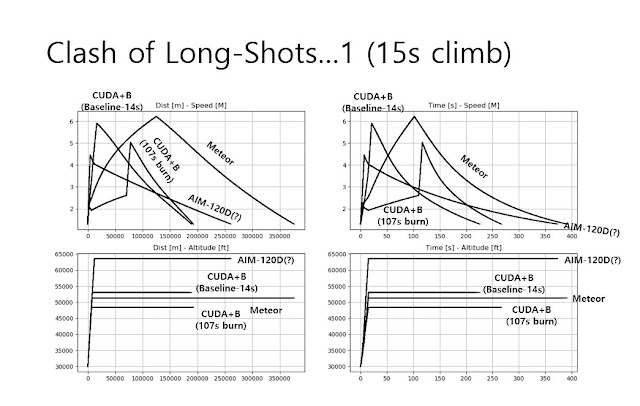 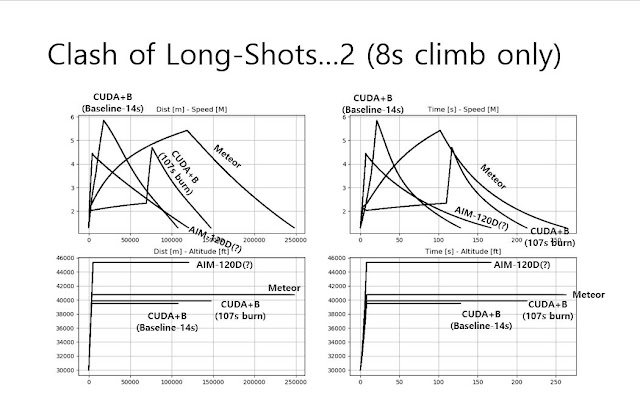 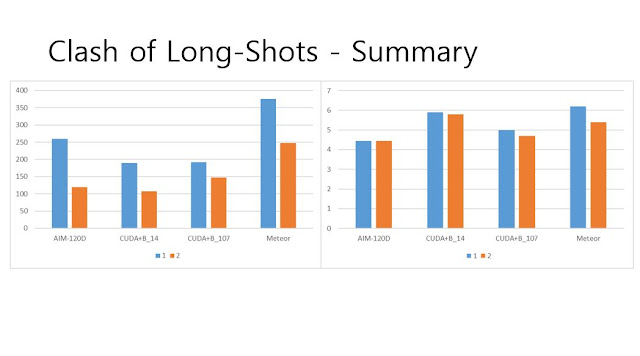 I have move on to the comparison between range-maximized version of the four models.

Initial climb trajectory is given as certain time of climb with certain angle. Indeed each missile reached different altitude depending on their climb capability.

Result is interesting that assumed AIM-120C having higher climb rate could achieve long range at the given trajectory. Its lower drag and high-altitude climb makes good synergy impact on its range performance. Although this result cannot ignore 100% of possibility of highly maneuverable CUDA+Booster, long-ranged AIM-120C, in the pure kinematic range view, has potential without taking risk of complex booster-ed missile.

AIM-120D(?) is the only candidate having similar range of Meteor at certain condition, then I could understand why some decision makers choose less-risky AIM-120D rather than complex long-range missile candidates.

** In real world, speed of Meteor would not reach hypersonic range because Meteor is throttle-changeable missile. But, still my simulation does not include that function (Future version probably consider it)

** Now, I move on to update of the SIM such as 3d-coordinate, trajectory-missile, long-range cruise function, and scramjet. Because I have little busy in job, speed of work can be low.


I have been busy for recent days, and I should spend a few busy days for personnel stuff.

So, update of the blog sometimes get delay.
(Busy time from May to August is expected)

Current plan for the future contents are shown below. 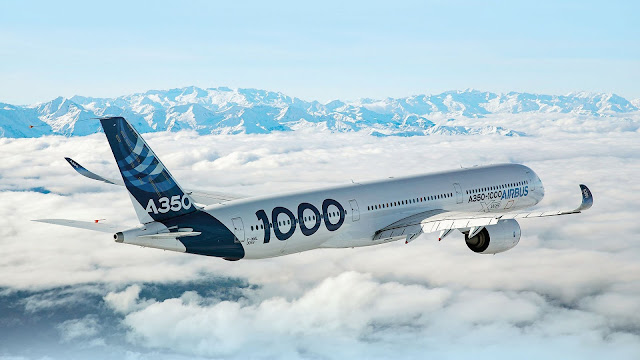