As my personnel interest, I figured out wing plan-form of the modern airliners. Mainly, aircraft of Airbus and Boeing are compared in few ways to find design characteristics of the wing.

You should know that performance of the aircraft is not only determined by the plan-form also by several factors like airfoil section, structure, position-of-wing, engine performance, and drag management. I hope you to see this article as 'fun-purpose' rather than serious 'performance comparison review'. 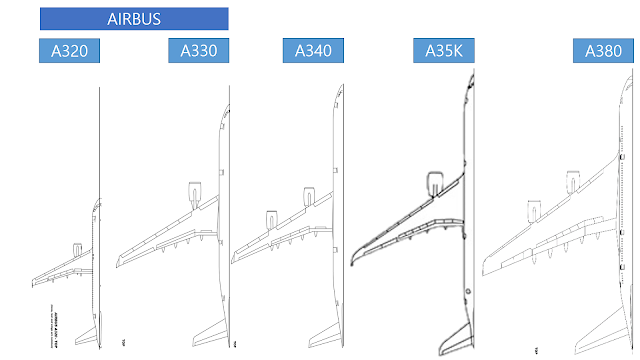 This shows direct comparison between Airbus-families including narrow and wide-bodies. As you could see that A330 and A340 is almost identical while the new two-engine-A35K has same size as A340. 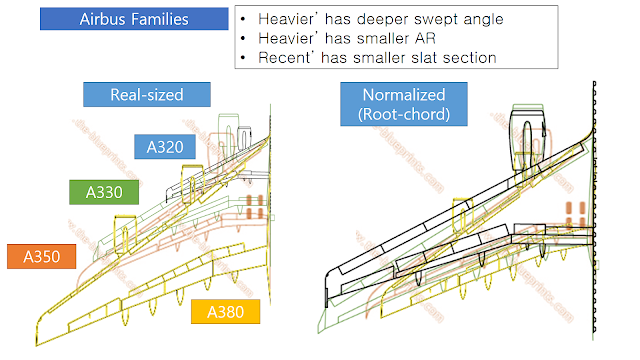 Now the smallest A320's wing has smallest swept angle among the Airbus', and as aircraft goes heavy, wing has more swept angle. You could see A320 and 330 has almost similar AR except change of swept angle. In normalized view, even position of the engine is similar for A320 and 330 while more swept angle of the 330's wing is compensated by frontal-position of the engine. It is interesting to see that A320 and 330.
Relatively newer and heavier 350 and 380 has deeper swept angle and smaller AR than previous generation because span of the wing is limited by the practical structural and space reason. Portion of the leading edge device is also become smaller in recent generation. 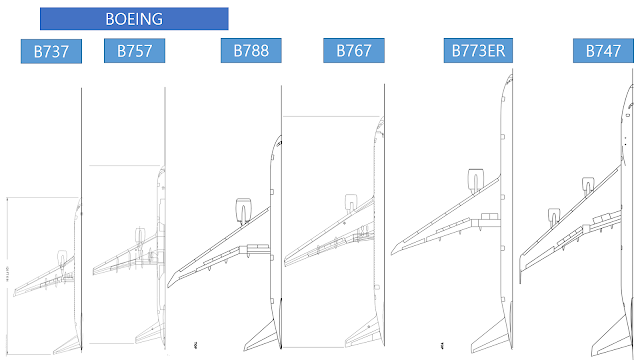 Boeing having longer history than Airbus has more various line-up in their squad; their fancy version of classics like 777X or 747-8 will be considered in the 'Airbus-vs-Boeing'. Recent 787 and 777 show how airliner have developed in limited size for better performance. 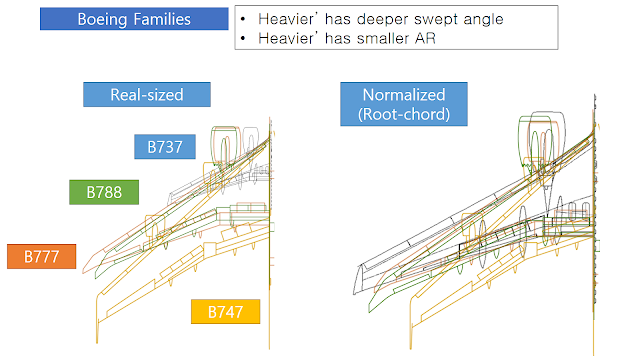 You should know that trend of swept angle vs weight is kept in Boeing; heavies has deeper angle than narrow bodies or lighter ones. It showed 'engineering-convergence' strikingly strong for both of the two Airliner giants. 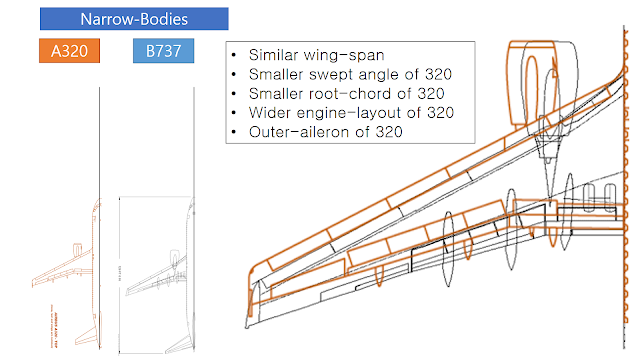 Now, we go to comparison of the two companies; both companies has their own best-seller in small-airliner class, 320 and 737. Both aircraft basically similar size however, in wing plan-form, layout is little bit different.
320 has more glider-like wing than 737, little bit smaller chord length with smaller swept angle. Also, 320 having longer landing gear and outer position of engine could adopt larger radius of the engine. While 320 has longer root section and outer aileron part.
If both aircraft have same airfoil section, 320 seems better efficiency at low speed region. We already know that low-speed region, take-off, climb, descent, and landing, takes relatively large portion of the flight-profile of narrow-bodies. 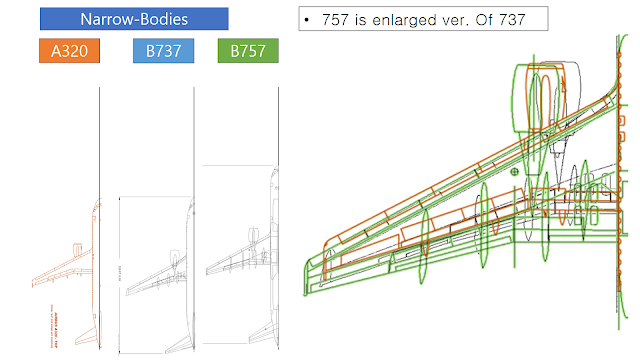 I have added 757 for this comparison, larger narrow-bodies, which will be replaced by Boeing's future NMA called 797. Basically, blue and green line has almost same profile except AR and engine position. In order to overcome the weight increase of 757, root-chord length is extended and engine is positioned at outer position. 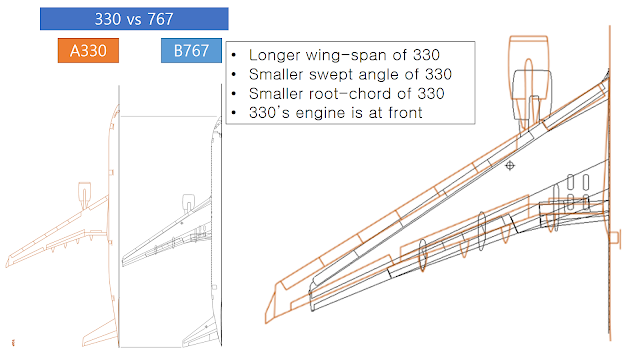 Tendency of 320 vs 737 is kept here; Airbus has smaller swept angle and root chord length. While 330 has longer span than 767, much frontal-position of the engine. 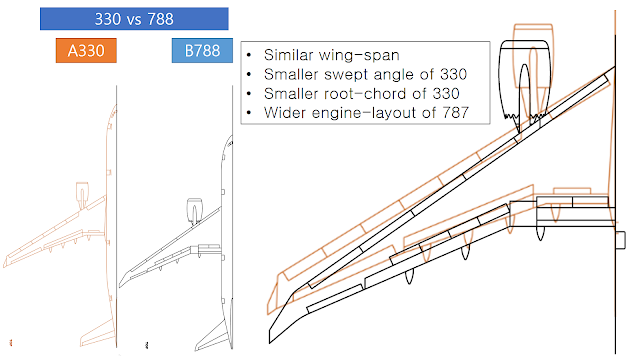 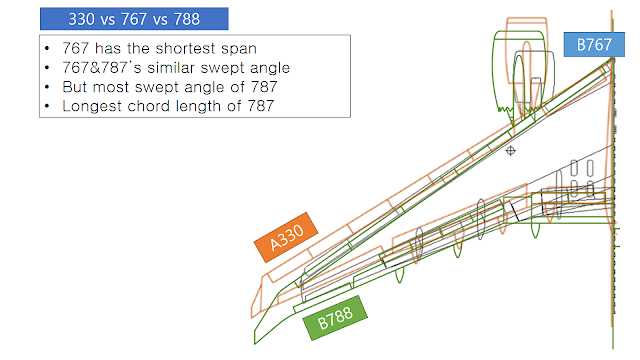 For three airliners, 330, 767, and 787, except engine position, Boeing family has similar layout than Airbus. Advanced wing-tip shape and longer root-section are noticeable for 787; it corresponds higher lift efficiency and heavier weight. 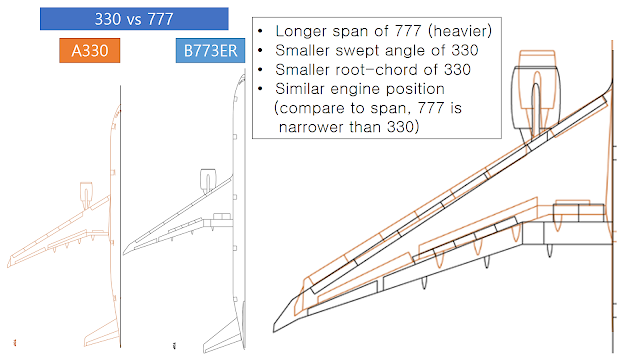 For two aircraft, difference of the swept angle is smaller than other two family comparison. Also, position of the engine is similar while 777 has longer span and root-chord length for its heavier weight. You could see that engine of the 777 is very large for its era.
Raked wing-tip makes noticeable difference at the tip. 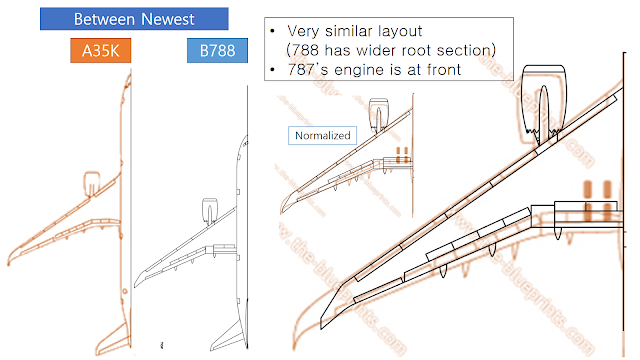 Most striking feature of this comparison is here. Their newest aircraft from clean sheet is very similar for wing plan-form; only difference is probably its sizing scale. Generally, 350 is larger aircraft however, even layout of control surface is similar for each other.
We should watch Boeing's NMA that how they designed the wing plan-form from clean sheet; NMA is similar to 350 and 787 style or not. 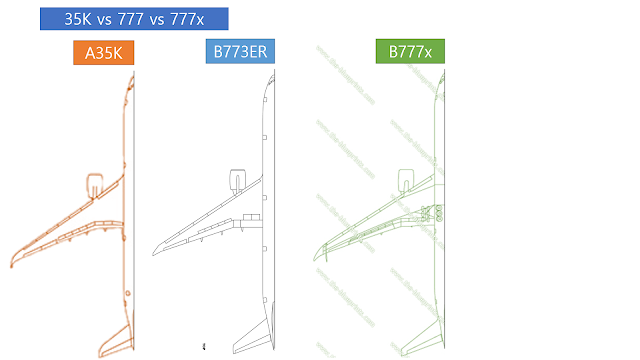 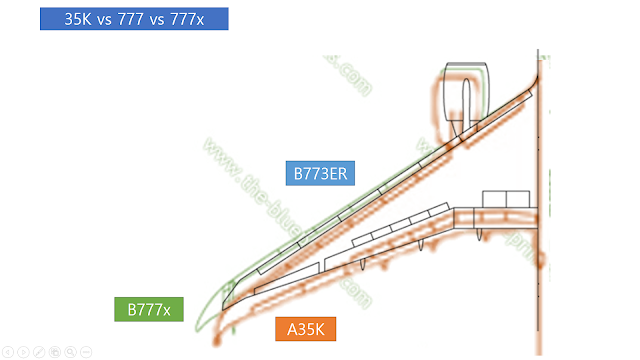 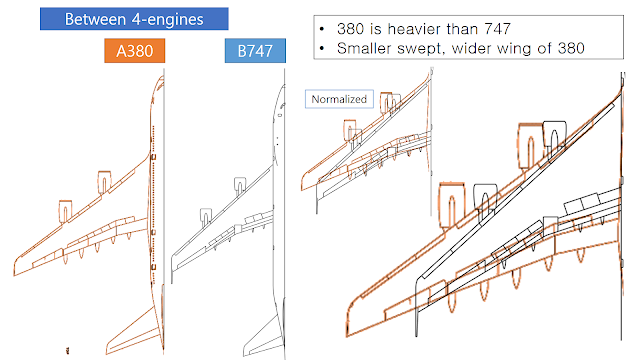 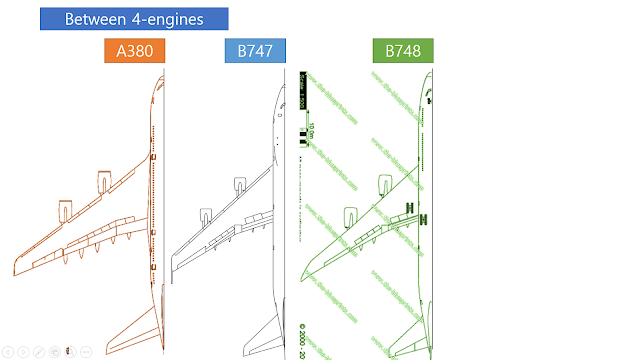 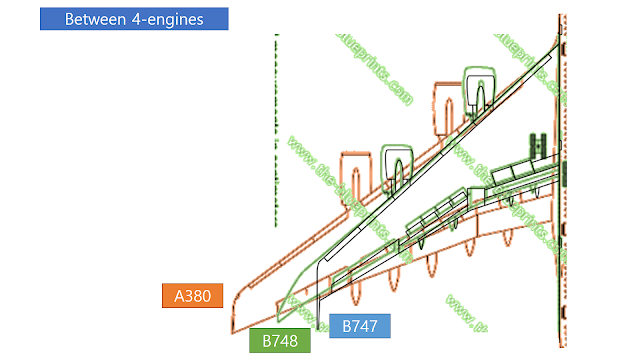 748 has new wing with wider span, wing-tip and bigger engine. Its wing-tip is similar to 777 style. However, still, 380 is much larger aircraft than 747. Comparison of style is more convenient at normalized configuration.
In normalized configuration, position of the engine become very similar for 748. Modified 748 now has larger AR via added raked wing-tip.

* The newest clean-sheets, 350 and 787, has very similar design; Airbus now has highly swept one